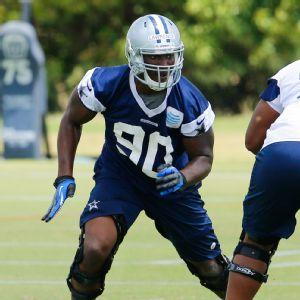 DeMarcus Lawrence, a rookie defensive end for the Dallas Cowboys, broke his foot during a recent team practice and will be out of commission for the next 8-10 weeks. The injury occurred during a drill that pitted Lawrence against teammate Tyron Smith. Smith blocked the rookie as he tried to rush to around him, causing him to fall and land on his foot at an awkward angle.

The Cowboys originally drafted the Lawrence to fill out their defense roster after the departure DeMarcus Ware, their previous defensive end. “His attitude ... you can't discourage him,” the team’s owner, Jerry Jones, said of him.

Playing football or other contact sports can often result in lower limb injuries like broken feet. If you suspect that your foot is broken, speak with podiatrist Dr. Edward Lang of New Orleans Podiatry Associates. Dr. Lang can accurately diagnose your injury and provide you with a bevy of viable treatment options.

A broken foot is caused by one of the bones in the foot ‘breaking’, or fracturing. Bones typically break when the bone is either bended, crushed, or stretched beyond its natural capabilities. Usually the location of the fracture indicates how the break occurred, whether it was through an object, fall, or any other type of injury.

Those who are experiencing any of these symptoms, or suspect that they have a broken foot, should seek medical attention in a center where x-rays can be performed. This is especially urgent if any of the symptoms include numbness, blue coloring, cold feet, cuts, misshapen toes or deformities as these indicate more severe cases.

Treatment for broken bones varies depending on the cause, severity and location. Some will require the use of splints, casts or crutches while others could even involve surgery to repair the broken bones. Personal care includes the use of ice and keeping the foot stabilized and elevated. Trying to keep the foot rested is important as the bones need plenty of time to heal and recover.

If you have any questions feel free to contact one of our offices in New Orleans, LAor Metairie, LA.We offer the latest in diagnostic and treatment technology to meet your needs.

Find us on the map